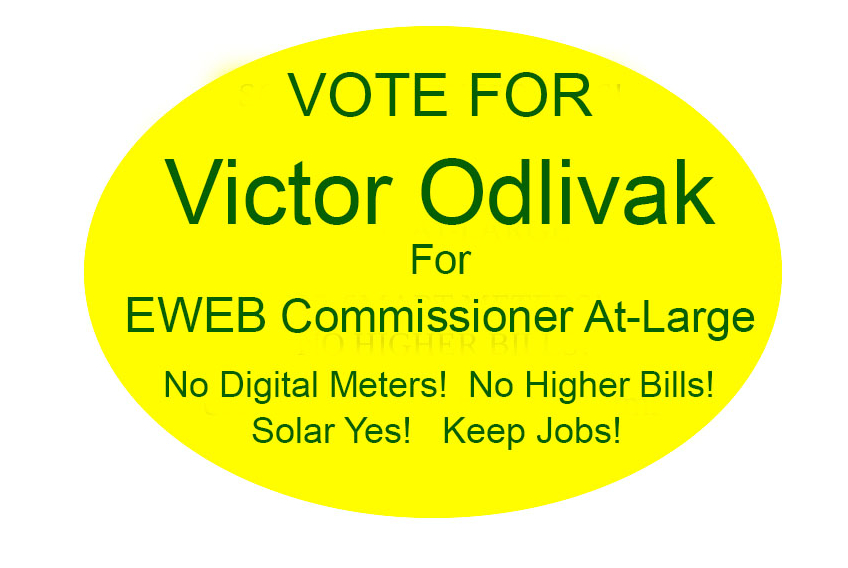 There will be one last campaign event at the First United Methodist Church at 1376 Olive St. on Tuesday May 8th 6:45 - 8:30 PM to have all three candidates present their views. There will also be opportunites for questions.

Endorsed by the local Our Revolution (Bernie Sander’s Eugene Group) on Saturday April 28, 2018. Freedom of Aerial Spraying Alliance (FAHA) and Our Community Our Rights (OCOR) also endorsed my campaign. This was recorded at the Our Revolution Meeting on April 14, 2018 in Eugene, Oregon.

For a longer more in depth interview of me please see April 21, 2018 recorded at the Cable TV Lane County channel 29 studio in Eugene by Joe Tyndall.

Victor received a total of 2604 votes representing 10.61 percent. Here is the Register-Guard Article. Thanks to all those who helped make this happen. I am so grateful !!


I, Victor Odlivak am running for EWEB Commissioner AT-LARGE position in the May 2018 primary in Eugene. I have worked for the last five years to stop smart meters in both Seattle and Eugene with the Families for Safe Meters. I was so fed up with the reversing of the OPT-OUT to automatic OPT-IN policy that I am running to make an effort to change this and educate people. Note, this is a complete reversal of what was stated at the video at the City Club from Feb. 17, 2017 . Frank Lawson says at the 47:00 minute mark that he is all for the automatic opt-out policy. He has totally reversed himself not listening to the people. See the EWEB Smart Meter FAQ which states the new policy: "If I opt out can I keep my old meter?
No. We are replacing all meters in our service territory over the next eight years. If you choose to opt out, the radio in the new meters at your residence will be disabled.."

The important thing to realize is that Smart Meters are a big distraction from our real task which is to Get off Fossil Fuels . For a historical perspective, please see this AMI 2015 document from EWEB . Note in particular on Page 3 under Discussion: EWEB is presently "capacity (kW) resource short" and relies exclusively on the marketplace today to meet these shortages. We do not want to rely on the market place. We want to be the source of energy as ratepayer owner generators with more solar and greater energy conservation for all. How do we do this??

Here is a preview of my election pamphlett statement. All of New Mexico just decided to get off the Smart Meter/AMI bandwagon because of the problems I mentioned in my later section Dumbness of Smart Meters. See the article from Santa Fe, NM Newspaper. We need to follow the example of New Mexico.

I will devote myself fully to implementing the policy I have layed out above. This will include office hours at EWEB for people to visit outside of normal work times. Since I am retired, I have the time to spend 10 days a month or more to follow through and research any agenda items for board meetings. I want to thoroughly investigate exactly where our energy and money is going.

Please remember the goal Reduce Fossil Fuel , not spending 200 million Dollars over the next five years on Smart Meters. You can read later on this page about the Dumbness of so called Smart Meters

I am currently retired and have been working the last 6 years as the volunteer treasurer for ASALV , a non-profit for rehabilitating street children in Nicaragua. I also volunteer with Community Rights Lane County working on the banning of Aerial Herbicide Spray and giving mother nature the rights of a person.

I have a B.A. in physics from Earlham College in Richmond, IN. and spent six months studying Appropriate Technology at the   Farallones Institue   when it was in Occidental, CA in 1983. This included Wind, Solar, Hydro Power and Biogas. I worked two years as a high school physics teacher and 25 plus years in tech support in the computer field. This included working with wind, solar and hydro power energy forecasting at 3Tier Inc. (now Vaisala) In 1985 - 1989, our volunteer group set up the entire recycling operation for Watertown, MA including building the ramps and bridge to load up the glass and metal containers.

Dumbness of so called Smart Meters

Not much is generally known about Smart Meters. First of all they are not at all smart. Some of the things they do are:

There is a lot of confusion out there between Smart Grid and Smart Meters (AMI) . They are totally different things and have nothing to do with each other. The idea of a Smart Grid is to get us all using renewable energy generated locally for maximum efficiency as opposed to monopoly fossil fuel power companies controlling the price and distribution. For more info, read this excellent report created by Dr. Tim Schoechle, who invented Smart Meters and now speaks out against them.

If you are in the Seattle or Pacific Northwest USA, please see here for more information.

There are various showings wherever you live of the film Take Back your Power. Please see the take back your power website mentioned here